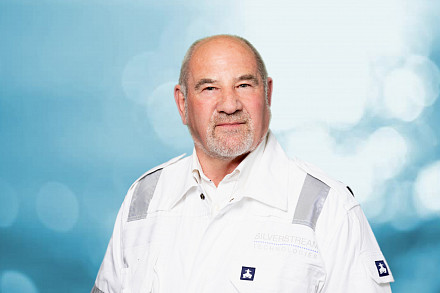 Richard joined Silverstream in 2021 as Commissioning Manager, bringing with him a wealth of experience starting in conversions and refits of large factory trawlers into offshore standby and survey vessels, then moving onto more complex projects.

Richard has worked for a number of companies at sea and ashore, (ship’s crew, electrical power and control contractor, ship's owner representative), including taking on his first sea going role as ETO (Electro-Technical Officer) on the Sir Walter Raleigh, a vessel taking adventurers around the world, carrying out scientific and community work.

He also worked as ETO on a number of research vessels for clients such as NERC (UK National Environmental Research Council), IOS (Institute of Oceanic Sciences) and the USGS (US Geological Survey).

While working for renowned seismic research company, Western Geophysical (now WesternGeco), Richard was for five years Senior ETO for vessels covering Europe, Africa and the Middle East. He was then promoted to worldwide Electrical Superintendent, covering major refits and new vessel builds. These were complex vessels with multiple LARS (Launch and Recovery Systems), and very large compressors for the seismic energy source.

Moving onto the oil offshore industry, he worked on conversions, mobilisations, and new builds, for pipe / cable surveying and trenching / lay vessels.

A particularly large three-year project was to work with a blue-chip oilfield construction company, assisting with the design and overseeing the build and commissioning on a multi-role DP2 construction vessel. The diesel electric vessel had two work class ROVs, two active heave cranes (250t and 450t), a 5000t pipe reel, and a variable geometry lay tower, so the vessel could lay pipe in shallow or deep water.

Richard’s previous role prior to joining Silverstream was as Principal Commissioning Engineer for Coldharbour Marine, where he ran the team of commissioning engineers developing and installing a unique ballast water treatment system.

Richard is a member of the Institute of Engineering and Technology.